When Bob and Meredith Stroud bought their twenty mountainside acres in WNC, they gave themselves a piece of heaven. When they placed a conservation easement on the land they gave a gift to the world. They became a part of protecting global biodiversity for everyone…forever.  They chose land in Whisper Mountain, located on the Buncombe and Madison County lines northwest of Asheville. 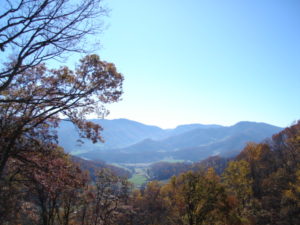 The Strouds and Troy Ball are friends from their days at Vanderbilt University. While catching up at their college reunion Troy mentioned that she and her husband, Charlie, were developing a mountain community near Asheville, NC; at the same time the Strouds said they were looking for mountain property in NC.  The Balls were creating a unique environmentally ‘green’ community within the high mountains above the Sandy Mush community. As soon as the Stroudsvisited in 2006 they were convinced that they wanted to be a part of the Ball’s vision.

The Balls, together with their family and friends have protected over 500 acres in Madison County through conservation easements through the Southern Appalachian Highlands Conservancy (SAHC; http://www.appalachian.org/). In 2009 SAHC teamed up with the Southeast Regional Land Conservancy (https://serlc.org/) to accomplish the Strouds’ conservation goal for the year. When ecologist Karin Heiman set foot on the tract she immediately noticed its diverse nature.

Although small in size, the Stroud’s land has many values. Continuity is an important ecological concept for sustainable habitat for plant and animal species. Habitat value is enhanced exponentially when connectivity occurs because habitat potential and diversity is increased. Whisper Mountain’s location is between the regionally significant Big Sandy Mush Valley and Pisgah National Forest. The Sandy Mush area has been the focus of conservation efforts supported by government funding for the last several years. Whisper Mountain is directly adjacent to currently protected Sandy Mush lands but not the National Forest, but does help to form a corridor of protected land between the two. This corridor will become increasingly important for wildlife migration and enhances ecological value of all the protected lands. The Stroud land will adjoin a future protected park, as well as being adjacent to other protected lands, within Whisper Mountain.

Looking back at early aerial photos of the Charlotte area drives home the point of the great importance at our present time to have forethought towards the future. Locations that were once wide-open greenspaces are now high-density urban areas, with the only greenspaces being enclosed in small parks and golf courses. Western North Carolina is undeniably under great development pressure. The ridgeline locations of the Stroud Tract forms part of the view seen from the Sandy Mush Valley. Every conserved tract gives the gift of enhancing scenic views sustaining the quality of life for people of the valley and the long-term economic tourism potential for the area.

The uncommon plant species hiding on the forest floor give away the rich soils and circumneutral geologic features. Potential habitat for rare species is easily found. Wildlife habitats stand out in the cavity trees and rock outcrops. 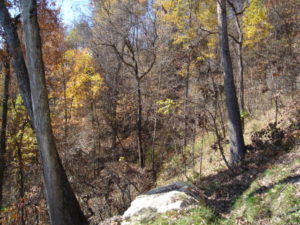 Also, a surprising new contribution for the world is being shown where forests are allowed to remain without being cleared or logged, such as the Stroud’s tract. Forest loss and depletion accounts for 25% of worldwide CO 2 emissions, which are linked to global warming. Intact forests absorb CO2. Young forests provide a carbon gain of about 140 tons of carbon per acre (Wayburn, 2008). Conservation forests 200 years old provide a carbon gain of about 275 tons per acre.

Thus the Strouds have accomplished protecting a gem for themselves and for the rest of the world, which others may wish to follow.