We honored two of our board members and don’t know how to thank them enough. Carl Nyberg and Julia Young have been stalwart members of our Board of Directors, keeping our conservation work going. Carl is our calm, level-headed, dedicated chairperson. For the Land Stewardship Award, this year was tied by two very deserving individuals.

People don’t usually think about it, but recreation can also cause big impacts to protected lands. For instance, Karin’s work with the National Park Service years ago related to protection of cliffs from rock climbers impacting rare cliff species & cutting 1,500 year old trees for better climbing routes. French Broad Crossing decided it was time to build its allowable allotment of trails. However, things were not going in a good direction and no one would be out there most of the time to oversee the placement and construction of the potential trails. This put the uncommon natural features the FBC is graced with in jeopardy. In stepped Tim Hale, like Superman. Mostly retired, he and his wife live at FBC near the conservation land. He used his engineering skills to work with Karin to design a trail that would avoid uncommon species, an unusual seep community, and a rock face used by plants and animals. He drew the layout, discussed materials that would cause the least impact, then flagged the location on the mountain. He & Karin crawled on hands and knees through rhododendron thickets and around rocks until they came up with a route to best protect the resources. Then he re-flagged where it needed to be changed, then watched over the crew each day to make sure they didn’t harm anything and kept in touch with SERLC. He was a most cheerful, positive, and organized thread through all of this and made things work out well for the environment. And he now watches over the trails for erosion and other issues, and helps save hemlock trees, doing all of this voluntarily. He is truly protecting the natural resources. 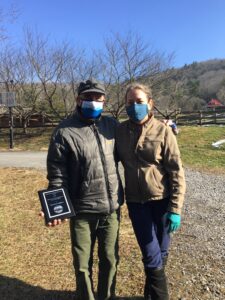 Bernie is quite an asset to our region and the world of nature. He is a Board Advisor to the Astronomy Club of Asheville and serves as a trustee on the board of the North Carolina chapter of The Nature Conservancy. We are lucky enough to have him living adjacent to SERLC protected land part-time. In one of the past years, he alerted us to an ATV trail going in without our notification process. This last year he brought to our attention cattle grazing that was impacting the creek in the high elevations at another location. Karin was up there monitoring and giving Audubon a tour looking for rare Golden-winged Warblers a couple of weeks before this started and would not have known there were even cattle up there for a long time. The water quality and high elevation flora were starting to become impacted. Karin & Bernie worked hard to orchestrate a process to have the owners set up a water source and fencing to get the cattle out of creek and forests. Bernie helped to watch over the land to ensure protection.