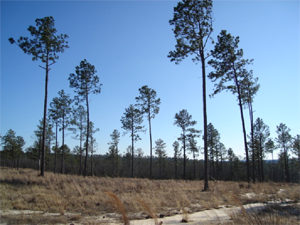 In 2010 the Southeast Regional Land Conservancy (https://serlc.org/) placed an easement protecting one thousand one hundred fifty-one (1,151) acres between Aiken, SC, and Augusta, GA. It is situated along in the northern edge of the Fall-line Sandhills which divide the Piedmont and Coastal Plain regions.

The easement is within an area identified by the State of South Carolina as high conservation priority for its Protection Strategy for Fall-line Sandhills Longleaf Pine Region. Longleaf pine savannahs are a rare natural community and the many of the few remaining examples are disappearing due to timbering and lack of fire. Mature longleaf pine habitat is especially valuable (due to the many rare species and biological diversity associated with this community type) and is given a protection priority by the state. The mature, open Pine Savannahs found on the property are highly significant. Some of the stands appear to be at least 75 years old.

The easement helps to protect land associated with rare species. The easement will protect habitat for which a historic population of the Federally endangered red-cockaded woodpecker used to be found. Good habitat still exists. The only way this endangered species can come back from near extinction is by having enough appropriate habitat such as that provided on the easement land. Eastern fox squirrels were noted during the survey. The easement will protect buffer land for rare species documented by the state, including bog spicebush, sweet pitcherplant, pyramid magnolia, piedmont water-milfoil, and nestronia. Based on the facts that the property contains listed species, as well as rich and diverse natural communities such as Bottomland Hardwood Forests & Pine Savannahs, the occurrence of other rare and uncommon animal and plant species is quite likely. Uncommon endemic (limited to a narrow global range) species such as wild rosemary are also found on the uncommon ‘sugar sands’ of the property.

The easement protects creek corridors, springs, and wetlands. The protection of the wetlands and tributaries provides public benefits that will be increasingly important in the future. These help to recharge ground water and maintain good water quality. The wetlands are also crucial for many plant species requiring wetland habitat, as well as animals such as crayfish and amphibians. The easement is adjacent to a protected county-owned wetland mitigation site, thus the connection adds ecological value to both sites.

Many aspects of sound ecological management are already in place, which greatly enhances habitat quality for rare and common native species alike. This especially includes the prescribed burning so crucial to the Pine Savannahs and all the species depending upon them. This easement protects the clean water and significant natural communities for all generations to come.