In 2008 the Southeast Regional Land Conservancy was pleased to double the number of acres under protection by adding four new projects totaling 3,492 acres. An additional 127 acres were also added to increase two existing projects. The projects are well-distributed across a variety of ecosystems, with one in the North Carolina Mountains, one in the Tennessee Ridge & Valley, one in the South Carolina Coastal Plain, one in the Georgia Piedmont, and one in the Georgia Coastal Plain. That brings SERLC’s total conservation land area to 6,254 acres. 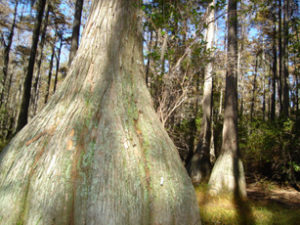 In the South Carolina Coastal Plain, a tract of 1,153 acres was placed under protection. The critical location is within both an area designated as part of the Savannah River Preserve and the South Lowcountry Focus Area (SOLO). SOLO was established to focus on habitat protection by the Atlantic Coast Joint Venture of the 1986 North American Waterfowl Management Plan (NAWMP), a cooperative effort between the United States, Canada and Mexico

The land is adjacent and proximal to thousands of acres of protected land and supports a variety of habitats including wetlands, bottomland hardwoods, uplands, working forests, Carolina Bays, aquatic features, small examples of Xeric Sandhill Scrub/Sand Barren Variant communities, and open fields. The Cypress Savannahs present in the Carolina Bays are considered globally rare. Mainly found in a small region centered around coastal South Carolina, the origin of Carolina Bays is still unclear to science. One theory postulates large meteorites impacting the earth. From aerial photographs, it can be noted that these numerous depressions are generally oval in shape and are oriented in the same general direction with the earth pushed up on one side. The depressions filled with water and became inhabited by wetland vegetation over time.

In the upper Coastal Plain of Georgia 1190 acres proximal to other protected lands were eased. The varied habitats include open fields, working pine forests, Bottomland Hardwoods, Cypress-Gum Swamps, wetlands, creeks, river bluff community, and river frontage. An interpretive natural area was established by previous owners, Union Camp, to showcase the significant natural features in the wetland areas. The property has a long frontage on the Oconee River and occurs within the Altamaha River Basin. The large Cotton House Slough runs through the property and is associated with many of the wetland communities.

In the Tennessee Ridge and Valley, 104 acres were eased in a region where the value of conservation is being compellingly realized. The regional ridgelines are highly visible and form the views for the cities, roads, and valleys. However, they are being aggressively covered in high-density developments and the natural and scenic character of the area is being eroded quickly. Since it appears there is no “ridge law” is in effect (codes protecting public views by stating that structures must be built below the immediate ridgeline) conservation easements appear to be the best measure of protection. Included on the land are a mature Oak-hickory forest, Alluvial Forest, and a historic mill site.

In Georgia, 991 acres were protected along the transition edge between the Piedmont and Coastal Plain provinces. Along with working pine forests, at least 103 acres (US COE estimates) of wetlands are included. The land also directly helps to maintain scenic views from well-known US Highway 441.

In the North Carolina Mountains 73 acres were added to a spectacular preserve that now totals 964 acres (see also the press release on 12.01.08 on conservation communities). The overall preserve houses rare species, high quality natural communities, rock outcrops, and many other features. In Alabama, 54 acres that include wetlands, open water, and lake frontage were added to an existing project.