And our premier Land Stewardship Award goes to… 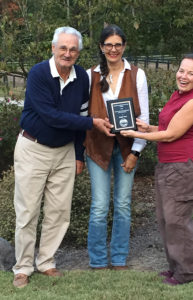 We at SERLC are so proud to start our new tradition of a Land Stewardship Award and were pleased to present the award recently. The award is for caring landowners who go above and beyond in protecting the land. And our inspiration for this, as well as the 1st recipient, was Stable View equestrian center & gathering place ( https://stableviewfarm.com/ )

Aside from their tireless work to create Red-cockaded Woodpecker habitat as part of the effort to bring back the species from near extinction, they are protecting the rare Old Growth Longleaf Pine savannahs on the property of which the woodpeckers and many other species are dependent. This type of forest has decreased to only 3% of its original range due to human causes, yet it is one of the most diverse in the world.

In its 4th year now, their native bird nest box program has been very successful. So far, 352 baby birds have successfully fledged from them, including many eastern bluebirds, as well as kestrels, tufted titmouse, and great crested flycatchers. SV is ‘learning about burning’, because prescribed fire is the key to healthy ecosystems in most of the southeast. Also, we decided a thorough plant survey would be a good idea and they commissioned it. A whopping 434 different plant species have been counted so far including a number of rare species. What an amazingly rich and diverse region we’re in!