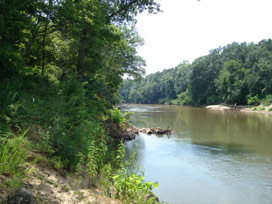 In the Georgia piedmont, three large tracts in proximity to each other were added, creating a total of 2611 protected acres. The easements include a variety of habitats such as Bottomland hardwood forests, pine plantations, Mixed mesic hardwood forests, Oak-hickory forests, cane breaks, Levee and Alluvial forests, open fields, wetlands, a large river, and creeks. One tract protects viewshed for Lake Russell. Another protects 8,000 ft. of frontage on the Broad River.

One of the last free-flowing rivers in Georgia, the Broad flows into the Clark’s Hill / Thurman Reservoir, which is important to the public as a drinking water source, for recreation, and as a regional amenity enhancing the quality of life. This water in turn flows into the Savannah River Basin which has been designated as a critical conservation area by a consortium of state and Federal agencies, conservation groups, and private landowners. It is part of the Federal Wild and Scenic Rivers System, plus the Georgia Department of Natural Resources has proposed that the Broad River be designated an environmental corridor. Recreational uses of the river include canoeing, kayaking, rafting, and fishing.

Prior to the 19th century, the Broad River in Georgia was the mutual border between the Cherokee people to the north, and the Creek people to the south. As a boy and young teen during the 1780s, the famous American explorer Meriwether Lewis of the Lewis & Clark Expedition honed his skills of exploration and wilderness survival, along with gaining first-hand knowledge about the native Americans Indians, while living beside the Broad River.