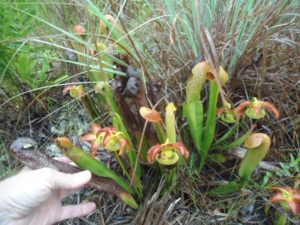 New for 2009 is the Boone Creek conservation easement. It is a 233-acre site located between the Okeefenokee National Wildlife Refuge and the St. Mary’s River in the Georgia coastal plain. The land cover is composed of a matrix of pine plantations and wetlands, with Boone Creek flowing through one corner of the tract. Small amounts of Bottomland Hardwood forest are found along the fringes of some wetlands and in the creek corridor. The main wetland type present is the Cypress-Gum Swamp (also called Nonriverine Swamp Forest or Forested Depressional Wetland). 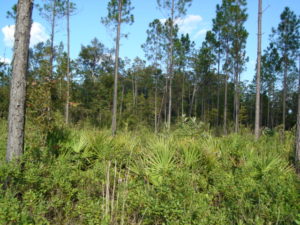 The state-listed hooded pitcher plant (Sarracenia minor) was found during the baseline survey. A second carnivorous plant, the sundew (Drosera sp.) was thriving near the pitcher plant population. At least one species of bog buttons (Lachnocaulon) was observed during the survey and could possibly be the rare southern bog button (Lachnocaulon beyrichianum).  Many of the rare and uncommon plant species depend upon the open habitat on the fringes of the wetlands. If the maturing pines and the open understory of the pine forests are maintained, good potential red-cockaded woodpecker (Picoides borealis) habitat will also be provided.

The conservation tract enhances ecological attributes for the Federally protected Okeefenokee National Wildlife Refuge. The refuge has been protected as far back as 1937 and is part of a national system to protect wildlife and habitats for public benefit (Okeefenokee, 2009; Folkston, 2009). Designated as a National Wilderness Area in 1974, the Okeefenokee Swamp is recognized as a Wetland of International Importance. Although the easement does not border the Okeefenokee it provides proximal protected habitat for wildlife migration, population expansion, and a potential refuge area in the case of widespread, intense fire occurrences within the Okeefenokee Swamp.